Working towards the personalisation of cancer treatment

Professor William Gallagher’s research is aiming to change this. As Professor of Cancer Biology in the UCD School of Biomolecular and Biomedical Science and Director of the Irish Cancer Society Collaborative Cancer Research Centre, BREAST-PREDICT, Professor Gallagher and his team work on developing personalisation of cancer treatments for triple negative breast cancer amongst others.

In collaboration with EU-funded research consortium RATHER, Gallagher and his colleagues (including breast cancer researchers from all across Ireland) have found evidence that a particular protein known as CDK7 is a driver for triple negative breast cancer and is therefore a candidate therapeutic target in its treatment. Their research on this driver was recently published in the American Association for Cancer Research journal Cancer Research.

Gallagher explains why this research is much needed: “If you take one cancer in particular, like breast cancer, we know that it is a mixture of different sub-diseases. We can commonly classify breast cancer into three or four groups. One that people may be familiar with is ER (Estrogen Receptor) positive. About 60 to 70 percent of women with breast cancer would be classified in this group and it is treated with endocrine or hormone therapy. This is a well-known and fairly effective treatment.”

“The other group, which accounts for about 15 percent of breast cancers, is HER2 (human epidermal growth factor) positive. Traditionally, this was seen as quite an aggressive group of cancers and those diagnosed would have had a poor outcome. However, the HER2 protein was one of the first main cancer drug targets, with a very specific drug known as Herceptin being developed. This drug has dramatically turned around the survival rate of women with this form of cancer such that HER2 positive has gone from being the worst kind of breast cancer someone can be diagnosed with to one with a much more favourable outcome,” he explains.

This leaves a third group – triple negative breast cancer (TNBC) – and unfortunately it cannot be treated via endocrine therapy, Herceptin or other HER2 targeted drugs because it does not contain the ER or HER2 proteins, hence the description of being triple negative. Gallagher explains that the only other option is to give patients traditional chemotherapy, which has familiar side effects such as hair loss and nausea, and in some cases, can lead to secondary cancer.

“Unfortunately, chemotherapy is a very generic and not very targeted treatment but it has been the only option for TNBC. But we know that fundamentally cancer is a genetic disease and so what we are trying to do within this particular aggressive sub-group is find specific alterations or biological differences that we can drug”.

Professor Gallagher and his fellow researchers looked at a particular collection of proteins known as kinases. There are about 500 known kinases in the human genome and many are already drug targets.

“We looked at all 500 kinases in the context of a large dataset on triple negative breast cancer and found a link between tumours with a high level of expression of the kinase known as CDK7 and a poorer prognosis for that patient,” explains Gallagher.

“That suggested to us that CDK7 could be a driver i.e. something that controls the disease. It is quite a fundamental protein that controls very key processes in how cells function and we believe CDK7 allows TNBC cells to grow in an uncontrolled manner. If we can use a drug to stop CDK7 from functioning, we can actually stop the cells growing and potentially kill the cancer cells.”

Gallagher and his collaborators showed in the Cancer Research paper that not only did CDK7 play an important role in TNBC but it could also be inhibited in a lab setting.

“We assessed a novel drug compound called THZ1 from the Dana-Farber Cancer Research Institute in Boston, since licenced to a company called Syros Pharmaceuticals. This drug knocks out the function of CDK7 so we used it to show in experimental models that it can stop certain breast cancer cells from growing,” says the Professor of Cancer Biology.

“Here in UCD, we take cells from human breast tumours and grow them in a lab. We treat them with this compound, which stops them from growing and they can actually die. It specifically seems to work in this triple negative form,” he explains.

This research is exciting and holds promise for those diagnosed with triple negative breast cancer but Professor Gallagher explains that several phases of clinical trials need to take place before a drug can be used as part of a cancer treatment plan. He also notes that there is no panacea to treat cancer across the board: “There is no one ‘wonder drug’ in cancer,” he says, adding that only a proportion of a population will respond to a particular cancer treatment.

“Our main interest is finding the small percentage of patients on which a specific drug works extremely well because we believe it is important to tailor treatment options for the particular disease a person has.”

Professor William Gallagher was in conversation with Marie Boran, a freelance science and technology writer 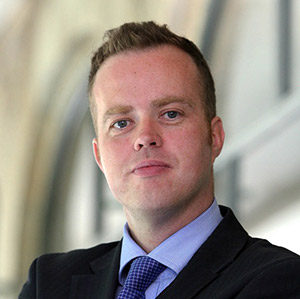 William Gallager obtained a PhD in Molecular and Cellular Biology from the Cancer Research UK Beatson Laboratories in Glasgow. In 1997, he moved to Paris to undertake a Marie Curie Individual Fellowship at Rhone-Poulenc Rorer (currently Sanofi-Aventis).