As director of the HIV Molecular Research Group (HMRG) within the UCD School of Medicine, Dr Patrick Mallon and his colleagues have broken new ground in HIV studies, leading the charge in research on older people living with HIV through POPPY (Pharmacokinetic and Clinical Observations in People over Fifty), the largest study of its kind in Europe.

Dr Mallon is Professor of Microbial Diseases and works to enhance collaboration between the HMRG and UCD Centre for Research in Infectious Diseases (CRID) towards what Mallon envisions as “moving into the realm of being one of few universities in Europe to have an integrated host-pathogen capability for very strong translational research and in order to apply that level of knowledge and expertise towards trying to look at HIV cure”.

Mallon’s passion for pursuing game-changing research developed in the late eighties and early nineties when he was pursuing his medical degree studies: “HIV had just emerged and it was having a huge impact globally. People my age around the world were being affected so it really struck a chord with me as a young person as well as a medical researcher looking at a brand new infection, an emerging disease, which fascinated me from a very early stage in terms of molecular biology and viruses.

“At the time, it was something that carried with it very little understanding but a huge amount of stigma. It was the mix of HIV being a virus causing a disease but also resulting in so much stigma from a societal perspective that really captured my imagination. This drove me down a pathway where I not only wanted to work in the field but I wanted to research in the field too.”

Mallon’s dedication is something he has seen and admired in others within this field: “There have been so many advances in HIV in the past generation as compared to almost any other infectious disease, from the point where 25 years ago we knew very little about the HIV virus to a point now where we are not only able to effectively treat HIV but are now seriously taking steps towards eradication of HIV and a HIV cure. I think that is a reflection of firstly, how global an issue it is, but also the passion that lies behind a lot of the work in this area.”

It was the mix of HIV being a virus causing a disease but also resulting in so much stigma from a societal perspective that really captured my imagination.

As a result of his research Mallon also feels compelled to fend off disinformation and prejudice with scientific fact. In response to a recent Irish Times Letter to the Editor where the author made a moral judgement about the use of a drug known as Truvada for pre-exposure prophylaxis or ‘PrEP’, Mallon’s letter in response outlined the scientific validity and importance of such treatments.

“It was a complete watershed moment to the whole HIV clinical and research community when the results of the PROUD and the IPERGAY studies were published almost simultaneously in the Lancet. These were two big European studies showing that Truvada, a drug we had been using for years to treat HIV, could also stop high risk individuals from acquiring HIV in the first place. Truvada was so effective that it reduced the risk of HIV acquisition by almost 90%. No other strategic intervention in HIV had got anywhere near this efficacy”, explains Mallon. These results galvanised the research and clinical community; it was the first time that science was telling them how to use simple tools to tackle a complex epidemic through preventing transmission and offered the chance to translate this into clinical practice.

“The letter addressed an example where important scientific advances meet attitudes in society that still hang around about HIV – about associating important scientific advances in understanding a global infectious disease with attitudes to sexual or personal behavior – suggesting that, for example, people who were interested in protecting themselves against HIV were in some way going to act irresponsibly. This just doesn’t make sense,” he adds.

Mallon’s own research group – the HIV Molecular Research Group – is internationally recognised for its work on the POPPY study that researches long-term outcomes in those with HIV; they look at heart, bone and kidney disease, which occur more frequently longer-term in people with HIV. His team delves into what is driving these diseases.

“Our job is to do the mechanistic part: try and figure out what’s causing the problem and then we can produce or identify a target to intervene; to develop ways to improve heart or bone disease outcomes,” explains Mallon.

“We have a remit where almost everything we do in research is developed in terms of large international collaborative networks and the POPPY study is a very good example of that. It is the largest study in Europe that is looking at older people with HIV. It has six centres around the UK and here in Dublin we have almost 2,000 recruits to this study and it is now entering its fourth year.”

Additionally, Mallon and his team have just completed research into the relationship between a commonly used HIV treatment called Abacavir and heart attacks. Ten years ago, a large international study identified an association between people on Abacavir and a twofold risk of heart disease. Mallon’s team found that the risk was reversible – it went away when people stopped taking the drug – and alongside Dermot Kenny’s platelet research group in the RCSI, they found that it was related to problems around platelet function, specifically an effect within platelets involving a pathway regulated by glycoprotein GP6.

“It’s probably one of the biggest safety controversies in HIV for the last decade and UCD, along with our colleagues in RCSI, really led the way in terms of not only identifying the pathway affected but bringing the research right through in the last seven or eight years to the clinical phase where we have very robust translational evidence from an international randomised controlled trial that definitively shows the association.”

What’s next for Mallon is plenty of collaborative work with UCD Centre for Research in Infectious Diseases: the HMRG have several projects up and running with Principal Investigator Dr Virginie Gautier, including profiling of individuals with HIV on treatment to figure out if there are certain biological profiles of individuals with HIV that are more responsive to cure strategies.

“I think marrying our host-pathogen research around HIV cure and longer-term clinical outcomes is really where we’re setting our ambition for the next five years within infectious research at UCD,” says Mallon.

Dr Patrick Mallon was in conversation with Marie Boran (BSc 02), a freelance science and technology journalist, Irish Science Writer of the Year 2018. 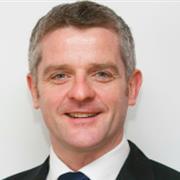