Associate Professor Pat Gibbons, UCD School of Agriculture and Food Science was in Tanzania working on a project with Irish Aid when the harsh realities of war and poverty crossed the border. Ethnic conflict and genocide in neighbouring Rwanda had led to a major movement of refugees and migrants across Africa. He saw, first-hand, the challenges of providing safety and security to millions of people in need. The international community had to respond. But how?

“Back in the 1960s and 1970s, the United Nations was raising concerns about the level of inequality in a largely post-colonial era. The international community accepted, in principle at least, that well-off countries should be providing support. At around the same time, the idea of ‘charity’ was being questioned. Aid was a way to contain people, keep them quiet and leave them where they are. We needed to go beyond this and look at humanitarian approaches that could lead to real sustainable change, which put the needs of the people affected – rather than the wants of the western world – at its core.”

Gibbons had graduated from UCD with a bachelor’s degree in agricultural science (BAgrSc) before going on to work as an agricultural advisor and then coming back to work in the University. His return journey to academia began when he decided to do some voluntary work overseas and, in 1988, established an agricultural high school in The Gambia. He spent three years there before moving on to work with the Agency for Personal Services Overseas, an organisation that funded his masters in rural development in UCD – the placement that brought him back to Africa.

We needed to…look at humanitarian approaches that could lead to real sustainable change, which put the needs of the people affected…at its core

Already, he was thinking differently about how developing countries could escape the poverty trap and, shortly afterwards, his mentor, Jim Phelan, UCD professor of rural development, asked him to come back to Ireland and work with him and a network of European universities on development issues. Gibbons travelled back and forth between Ireland and Tanzania doing more research and Professor Phelan asked him to write up his research into a doctoral thesis.

“It led to me becoming an accidental academic,” says Gibbons. “This was 1996/97, and humanitarianism was not quite a discipline – yet. Speaking with various aid charities, it became clear to me that humanitarianism, the idea of doing good and looking after the welfare of fellow humans, needed good management and business skills, although others focused on the legal dimension, or saving lives in catastrophes, or on social anthropology.”

it became clear to me that humanitarianism, the idea of doing good and looking after the welfare of fellow humans, needed good management and business skills

Aid often comes with strings, Gibbons says. “Humanitarian action has to be apolitical, whereas development aid is very political. When I started off, around €800 million was spent every year on humanitarian action – in 2018 that had risen to €28 billion. We developed an interdisciplinary platform to deliver the programme and then developed transdisciplinary research themes including urbanisation and, today, the links between urbanisation, climate change and the migration crisis. And all of these are connected: poor people are displaced from their homes by conflict or crop failures and they have few options but to go to cities, where there is massive growth in informal settlements with refugees and migrants. These areas are poorly serviced, but urbanisation is expected to grow from 55% today to 70% by 2030 – and much of this is happening in Sub-Saharan Africa.”

Today, politics throughout Europe, as well as in the United States, have been shaken by the mass movement of refugees and migrants escaping conflict, poverty and climate-change related droughts. In 2016, the international humanitarian community came together in a consultative process to discuss these problems.

Working with the office of the President of Ireland, Michael D Higgins, the CHA co-ordinated with various stakeholders and put together a presentation for the World Humanitarian Summit in Istanbul in 2016. Out of this, the CHA – and Gibbons – tightened their research themes to focus on urbanisation, gender-based violence, resilience and localisation (how humanitarian assistance, including money, should be distributed on the ground).

urbanisation, climate change and the migration crisis…are connected: poor people are displaced from their homes by conflict or crop failures and they have few options but to go to cities, where there is massive growth in informal settlements with refugees and migrants

“The million euro question is how do we increase empathy and help people,” says Gibbons. “Yes, Ireland were never colonisers, but we are very much part of the North and Northern society, which did benefit from colonialism. And yet Ireland has never met its commitment to provide 0.7% of GDP to try and address global inequalities. We can be doing more, although the quality of nature of Ireland’s engagement in the global ‘aid’ sector has been tremendous, including President Higgins’ magnificent contribution to the summit.”

The CHA is now a core member of the BRTE (Building Resilience Through Education) project, an intersectoral and multidisciplinary approach bringing together partners from the academic, private and NGO sectors in the EU to find innovative ways to strengthen the resilience of communities affected by recurring disasters.

But this doesn’t mean that communities in the developing world are simply being asked to be more stoical, Gibbons explains and, of all western developed countries, Ireland is perhaps the best example of how a poor country can exit the cycle of poverty. “We have to increase opportunities and supports for countries to help them. We were lucky in Ireland to have TK Whittaker, a visionary civil servant who saw that Ireland needed to leave protectionism behind. Ireland, maybe because of our complicated history of famine, colonisation and partition, brings a rich experience to be shared on the global stage.

“Africa, however, does not have to open up: we have to change the terms of trade so that Africa can engage beyond mere subsistence, and BRTE is about trying to push for a way to bring about this change, including education.”

The CHA is currently working with an Ethiopian university to explore ways in which technology could transform the country; partners include Concern, Carlow IT and Future Analytics.

“We are trying to encourage research and incubation units, as well as facilitating meetings with companies here,” says Gibbons. “It is not about us being saviours but helping countries to develop as Ireland did: with emigrants coming back from other countries with enthusiasm and ideas. Ireland’s perspective can make a difference.”

Peter McGuire, BA (2002), MLitt (2007) is a freelance journalist and a regular contributor to The Irish Times. 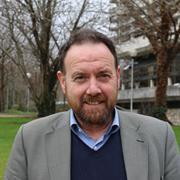