Should every country go smoke free?

There are an estimated one billion smokers throughout the world. But where smoking bans have been implemented there is strong evidence to show that populations, both smokers and non-smokers, have benefitted significantly. Professor Cecily Kelleher has led major reviews of research on the topic and explains why there is need for more study, particularly into the impact of bans on the disadvantaged and the young.

The evidence is highly persuasive: smoking bans work on a number of fronts. Evidence from Cochrane Reviews led by Professor Cecily Kelleher in 2010 and 2016 underpin that. They show how such bans led to improvements in the health of smokers (2010) and passive smokers (2016). What is not as clear is the impact such bans have on different societal sub-strata such as young children, disadvantaged and minority groups.

That, Professor Kelleher argues, is where we need more detailed research. “We would now like to see more research carried out on the effects on young children, and to see if the disadvantaged were affected and the impact around perinatal and maternity outcomes, for example.”

Broadly speaking, in the context of this interview, Professor Kelleher is concerned with approaching the issue of smoking bans from two major perspectives. Firstly, there is the desire, through the evidence of research and reviews, to show governments the health benefits of introducing bans in public places. Second, she would like further research to add flesh to the bones of what the Cochrane Reviews have yielded thus far; by examining the benefits accruing to different groups of non-smokers.

The research to date has been fundamental in building a major body of evidence on the beneficial impact of bans on public health. The Cochrane Review, internationally regarded as hugely significant, was funded by the Health Research Board (HRB) in Ireland. It was led by Dr Kate Frazer as HRB Cochrane Training Fellow and Lecturer in the School of Nursing, Midwifery and Health Systems at UCD. Professor Kelleher was the senior author for both the review in 2010 and the update in 2016. She is currently College Principal of the College of Health and Agricultural Sciences. She was previously Dean of Public Health at what is now the School of Public Health, Physiotherapy and Sports Science.

She is also Honorary Consultant at the Department of Preventive Medicine and Health Promotion at St Vincent’s University Hospital. At the hospital they have a smoking management and cessation programme and have introduced the first campus-wide hospital smoking ban in the country. It has received a gold-level international award by ENSH (European Network of Smoke-free Hospitals) for this work.

All this work is being undertaken against a grim backdrop. Tobacco is a major cause of death globally. It is estimated to be responsible for around six million deaths every year with an estimated 10pc of those from the effects of passive smoking. The World Health Organisation (WHO) constantly calls for measures to control tobacco consumption. The 2016 Cochrane Review provides further justification for those demands. Its observational studies looked at evidence into the effects of passive smoking.

There were 77 studies reviewed and 44 of these assessed the incidence of cardiovascular disease. The review found evidence of a significant reduction in hospital admission rates for heart attacks after smoke bans were introduced. Additionally, it found the largest reductions in admissions for heart disease were in non-smokers.

As a researcher, I am providing evidence. So the message for policy makers everywhere is that the introduction of a legislative smoking ban leads to improved health outcomes through a reduction in secondhand smoke exposure.

The reason we did the follow-up (2016 review) was that there was emerging evidence then that smoking bans had impacts on health outcomes. The new review shows much stronger evidence for this in the case of heart disease,” Professor Kelleher says.

With the 2016 update they found: “Along with evidence of improvements in the rate of cardio vascular disease, there were a number of other health outcomes assessed but with fewer studies to date. For instance they looked at perinatal or birth outcomes, showing some evidence of impact on birth weight but as yet less consistently”.

She adds: “We need to build the evidence base on sub-groups of populations. We see that bans are effectively reducing passive smoke exposure, but we would also like to quantify this more clearly to show the economic benefits on the population.”

Professor Kelleher continues: “Because the world population is growing so quickly, we have a huge number of active smokers in countries such as China and India.” That is where and why bans can be so effective.

Professor Kelleher also points out: “Different social groups differ in their activity and response to cessation measures. There are a whole range of interventions to stop people smoking.” She says it is important to remember too that: “We are supporting smokers, not blaming them. The aim is to help them quit if they wish and to eliminate the hazard of passive smoke exposure.”

The critical point, highlighted by the 2016 review, is how effective the bans are in improving the health status of passive smokers.
“That’s why the evidence base is so important because it could help us to quantify further the impact on people who don’t smoke.” Following the world-first Irish smoking ban in workplaces, Professor Kelleher recalls that hospitality workers, for example, clearly benefitted. That has subsequently proved true in many countries, as shown in the first review.

Between 2010 and 2015 many countries implemented bans and in another five years she hopes to see “many more”.

“As a researcher, I am providing evidence. So the message for policy makers everywhere is that the introduction of a legislative smoking ban leads to improved health outcomes through a reduction in secondhand smoke exposure.”

And, she emphasises, the better the evidence of the beneficial effects of smoking bans on sectors within society, the more powerful an already-strong argument for bans will become.

This story first appeared in the spring 2016 edition of UCD Today magazine. 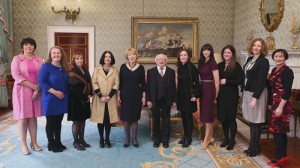