Weighing up the global scales of justice

Professor Ben Tonra, Jean Monnet Professor of European, Foreign, Security and Defence Policy at the UCD School of Politics and International Relations, will lead a UCD team as part of a larger multinational four-year global research project to help find a new focus and understanding of what ‘justice’ means in a global context. Here, he tells of his hopes and ambitions for the major undertaking.

Professor Ben Tonra and his team from the UCD School of Politics and International Relations are seeking to establish what ‘justice’ truly means in the real-world contexts of governments and the people they govern.

Professor Tonra and his colleagues are setting out on an exhaustive, four-year complex project to distil what ‘justice’ has evolved to mean in its myriad manifestations against a huge variety of cultural, sociological, political and economic backdrops.

They are doing so with the aim of making senior EU policy makers better informed and attuned when drawing up, and assessing the ramifications and interpretations of its own policies within the international milieu. The UCD team of political scientists, theorists and economists will partner academics from universities across four continents in the unique, far-reaching enquiry.

The research is possible because the project, entitled ‘Reconsidering European Contributions to Global Justice (GLOBUS) , has been awarded €2.5m by the EU’s Horizon 2020 programme. According to Professor Tonra, the hope, simply put, is that their extensive research will bring greater understanding and accommodation of the term ‘justice’ and its administration within global societies.

The UCD team is leading the work on Security and Conflict Resolution but colleagues will also be making critical contributions to the project’s above-mentioned themes.

Professor Tonra says: “The whole area of foreign policy is hugely complicated. [In the West] we have our own understanding of what justice is. But in other countries, such as those in the Islamic world, and in China for example, there are different perspectives.”

“So if you understand how other countries with different political systems and values to ours see things, that can be a big help for European foreign policy makers.”

The aim, he says, is to feed back as much information of depth and quality to policy makers.
Underlining just how global the research will be in that regard, Professor Tonra says it will mean looking at the rationale of what ‘justice’ means from Brazil, to China, South Africa and the Russian Federation. “There will be very interesting bilateral conversations on all of these inter-relationships.”

However, he makes an important point. While the work will lead to a better understanding and perception of what justice means in different societies, it does not necessarily follow that the EU and its member states need to qualify or weaken their own stance and position on what they deem the concept and associated policy practice requires. “We can’t just throw (EU policy) aside as a compromise with other partners. But it can lead to a far better understanding of these other perspectives and that can better inform how the EU approaches these complex matters.” This is a real attempt to formulate a working overview of how governments and societies interact internally and externally in the real world of economics and politics.

His enthusiasm for the study stems not just from the breadth of the examination that lies ahead but, as one who travelled a lot in his own youth, he has an engrained sense of internationalism. Born in the US, he grew up here and in the UK and the US. “Some argue that foreign policy is primarily concerned with a rational balance of costs and benefits and the pursuit of power. This project is rather about looking at how the perceptions of one’s self identity and values translate into the international arena, how these then relate with those of other global partners and how then we attempt to address shared challenges such as migration, climate change, security and global prosperity.” And that would seem to be the vortex from which Professor Tonra, his team and the academics working with them will attempt to extract meaning and better understanding. 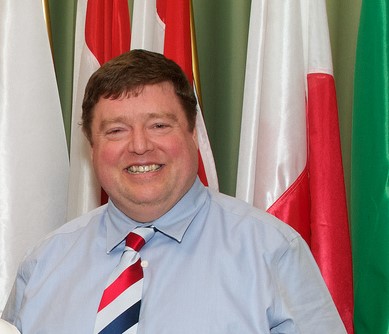