The Cambridge History of Ireland

Did you know the Irish invited the English to invade us in 1166?
We did! To be precise, the first English conquerors arrived by invitation when the exiled King of Leinster Diarmait Mac Murchada approached King Henry II for help in regaining his kingdom.
Did you also know that by the 16th century, Ireland’s contacts with the Iberian Peninsula were well developing and the Irish played a role in the controversial slave trade?
Did you know that up to 30% of Ireland’s population may have perished during the Cromwellian conquest?
Would it also surprise you to know that by the end of the 19th century, two out of every five Irish-born people were living overseas, making Irish emigration a truly global story?

Well, these vignettes are all revealed in a newly-published authoritative history of Ireland, which has attracted rave reviews. From the arrival of Christianity in 600AD to the impact of the Marriage Equality referendum in 2015, the impressive Cambridge History of Ireland covers it all.

Professor Thomas Bartlett, now retired but previously of UCD School of History, was tasked with being overall editor of this prodigious project almost five years ago. Lauded by Professor Diarmaid Ferriter in an expansive book review in the Irish Times, the 100-odd historians who contributed to the book, including some of UCD’s finest, were given one simple instruction – Don’t be boring.

“Technology (including digitised sources) and discipline have won out, but so too has clarity of expression; these contributors were told by the general editor Tom Bartlett to write accessibly and they have delivered the resultant lucidity with aplomb over 2,800 pages covering 1,500 years of history,” Ferriter wrote.

Over a pot of tea in the National Library, Bartlett explains his motivation for the book, describing how previous attempts to detail the history of this country had suffered from being bland and dull.

“We wanted a mix of senior historians as well as up and coming ones too. But I stressed to the volume editors to ‘get people who can write’. People who can deliver. There are plenty of brilliant historians who can’t deliver,” he says about the process of choosing who to contribute. He references in particular A New History of Ireland, which Oxford University Press published, in nine volumes, between 1976 and 2005. Edited by TW Moody of Trinity College Dublin, Bartlett says it was an amazing enterprise for its time, but it has dated.

We wanted a mix of senior historians as well as up and coming ones too. But I stressed to the volume editors to ‘get people who can write’. People who can deliver. There are plenty of brilliant historians who can’t deliver

“It was a work of its time, as shown by its almost entirely male cast of contributors. Its emphasis on politics, usually high politics; its rather dull writing…. Moody argued for scholarly detachment, turning the gas down very low, which can lead to blandness. People found that unappetising and tiresome,” he says.

He says he agreed to be general editor of this series because he had become concerned about the “explosion” in publications in Irish history over the past 40 years. “This explosion in writings rendered the subject all but inaccessible both to the student and to the interested reader.”

His work, along with volume editors Professors Jane Ohlmeyer, James Kelly and Brendan Smith, is what he calls a new synthesis, drawing on the most recent scholarship, to give what he calls this generation’s verdict on Irish history. The Cambridge History breaks new ground by focusing on issues that previous exercises of this nature largely ignored. Subject matters like sex, the environment, emotions, age are among the themes explored by this somewhat radical collection.

It is clear from our discussion that Bartlett, a schoolmate and contemporary of Gerry Adams, the former Sinn Féin President, is haunted by the impact of the Troubles in Northern Ireland and was keen to reflect that in Volume IV which covers the period from 1880 to the present day. In a wonderful photo essay, Bartlett aims and succeeds in showing the chaos and the confusion of the 30-year period of sectarian violence which blighted the troubled province.

“My photo essay, I deliberately made it confusing, I wanted minor characters UDA gunmen, IRA gunmen, men who were not normally written about but drove the fight,” he says.

Overall, reflecting on the body of work as a whole, I put it to him that there are four major themes over more than 1,500 years of Irish history – religion, violence, anti-British sentiment and poverty. He agrees but adds a fifth – emigration.

One of the most controversial aspects of the collection is the decision to come right up to the present day, which several chapters discussing matters as recent as the financial crash of a decade ago and the 2015 Marriage Equality referendum. Bartlett agrees that it is too early for proper perspective on many matters in the past 40 years, including the troubles, but it was important to be relevant to a changing Ireland.

“There is a danger that it is too recent, absolutely, that is a danger,” he says. But he points to a chapter written by father and son historians John and Paul Bew, on the North, saying it was “deliberately opinionated. No one has a handle on the past 40 years, and it will probably take 100 years for that to happen,” he says.

Professor Tom Bartlett was in conversation with Daniel McConnell (BA, History and Politics 2000). He is a former editor of the University Observer and is the Political Editor of the Irish Examiner.

Emigration makes and has shaped this state for the past 150 years, that has become clear. I would not have said that 40 years ago. It doesn’t explain everything but you can’t explain much without it.

Volume I: 600AD – 1550AD
Introduction of Christianity to the Scandinavian invasion:
* By the 13th century, only one-fifth of the island had regular access to town life in the late 13th century.
* “At the time of his death in 1303, one unfree tenant possessed four cows with their calves, three work horses, thirty sheep, one pig and stacks of oats, wheat, barley and turf,” Margaret Murphy writes.

Volume II: 1550AD – 1730AD
* In the 17th Century, the Ulster Plantation saw 3.6 million acres of land seized from the natives, which led to the 1641 rebellion and an onslaughts on Protestants.
* By 1703, Catholics owned 14 per cent of Irish land and penal laws meant significant restrictions on their rights.

Volume III: 1730AD – 1880AD
The Protestant Ascendancy:
* Amid international revolution and Napoleonic wars, we see the rise of republican separatism and unionism emerge…Tom Bartlett describes this time as the “crucible of modern Ireland”.
* The Act of Union to the rise of O’Connell, the plight of Catholics and a great famine dominate a dark time.
* Irish emigration was thus a global phenomenon but not necessarily all a negative one given the evidence of upward social mobility.

Volume IV: 1880AD to the present
The break with Britain to a modern independent republic:
* As the link to Britain begins to crumble, under land acts of 1881-96, the Irish Land Commission advanced £23 million to 73,000 tenants to purchase farms comprising 2.45 million acres.
* David Fitzpatrick says the Great War saw the deployment of more than 200,000 Irishmen in the “British” wartime forces which he says “dwarfed all other military enterprises in Irish history”.
* Daithi O Corráin is damning of the demise of the Catholic Church and says by the 1950s it had become a “lazy monopoly, the legacy of which is proving to be its greatest burden”. 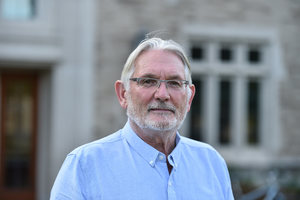 Full Profile UCD School of History Working with us