“Every year 50,000 women and 500,000 babies die from preeclampsia,” says Professor Patricia Maguire, Director of the UCD Institute for Discovery and Co-Director of the interdisciplinary research group Sphere at UCD Conway Institute. “And another five million babies are born prematurely every year as a direct result of preeclampsia. I get goosebumps every time I say this,” she adds.

Professor Maguire is a biomedical scientist and project lead on AI_PREMie, an innovative interdisciplinary effort that has resulted in the development of an advanced test using machine learning to both diagnose preeclampsia (PET) and accurately predict a patient’s outcome. Right now, there are no other diagnostics that can do this; there are only tests that can rule out rather than confirm PET. In fact, clinicians are largely reliant on blood pressure and protein urea as indicators of preeclampsia, just as they have been doing for the past 200 years. The AI_PREMie test will change all of this and it is now available in the three biggest maternity hospitals (the Mater, the Rotunda, and Holles Street) covering almost 50% of all births in Ireland. So how did it come about?

It started with a serendipitous cup of coffee in UCD Conway Institute. Six years ago, Maguire met with then new arrival to the Institute Dr Fionnuala Ní Áinle to discuss their research interests. As a consultant haematologist between the Mater and the Rotunda hospitals, Ní Áinle described her experiences seeing women with severe preeclampsia and told Maguire that there was no good way to either diagnose the disease or to predict its severity. But what if there was something in the blood, a unique biomarker that could serve as a clue?

Maguire had been working on a specific blood cell – the platelet – and alongside her research team they were the first group to discover and define the unique information that the platelet contains: “We coined the term ‘platelet releasate’ back in 2004. It is all the cargo that the platelet carries, and this cargo is activated when you cut yourself, it has wound healing and tissue regeneration properties that respond in real time.”

“The platelets are the only blood cells in our body that have a unique ability to collect information in real time and it got me thinking. What if this cargo or information changes in disease – and what if this could tell us even before symptoms of the disease manifested, that this disease was already there?”

And so, the conversation over coffee turned to how platelets might be the key to detecting preeclampsia. Could the platelet releasate in individuals with preeclampsia be markedly different to healthy individuals? Then-PhD student and junior clinician Dr Paulina Szklanna came on board the project and processed blood samples from a small but very important study of pregnant women at the Rotunda.

“It was an incredible study. We found significant peptide protein differences in the platelets between the women we recruited and samples from women who were healthy and pregnant as well as healthy women of the same age who weren’t pregnant,” explains Maguire. As this research was built upon and strengthened, she had another serendipitous coffee-related encounter, this time in the University Club Café. Maguire bumped into Dr Colm McMahon, a senior research partner at UCD Research and Innovation who suggested she apply for SFI’s AI for Societal Good Challenge, which was looking for interdisciplinary projects leveraging artificial intelligence to tackle societal challenges on a national or global scale.

“I looked at him and thought ‘how does preeclampsia fit there?’ And he said ‘you’ve always told me you have so much data. So maybe now is the time to harness that data’. So that’s what we did. We applied, got picked as one of the 12 initial teams and as our societal champion we brought on board Professor Mary Higgins, consultant obstetrician and gynaecologist at Holles Street and senior lecturer here in UCD School of Medicine.”

Maguire says that one of the unexpected benefits of this SFI-funded project was the prerequisite for PPI (Public Patient Involvement). It meant that her team had the opportunity to work directly with women diagnosed with preeclampsia: talk to them and their families, record their experiences.

That’s where this really took off as a project,” reflects Maguire. “The amazing thing was that even though some of these women had lost their child, they wanted to make sure that it didn’t happen to anybody else. They told their story so that they could help others.”

Other stakeholders in the project include clinicians but also data scientists, computer scientists and statisticians. All the valuable data collected throughout the project has been used to create machine learning models that can not only diagnose preeclampsia but suggest a path to treatment by predicting the progression of the disease in an individual patient.

“It was an incredibly moving experience to understand what journey those women were on, and how I could help as a scientist."

The road to creating AI_PREMie has been paved by the powerful software provided by AI and data analytics company SAS Institute. “It is what has enabled us to get our machine learning model so quickly from the lab into production. And as a team member, SAS’ Chief Technology Officer meets with us every week, helping push us along.”

The data insights provided by the AI_PREMie algorithm is crucial to a clinician who needs to make a critical decision on whether to deliver a premature baby by emergency C-section or wait another day, which may be vital extra time for the development of the baby. When a clinician suspects someone may have preeclampsia, they will be able to order the AI_PREMie test, which pulls in the patient data and lab data in order to produce a read-out within a couple of hours. It doesn’t tell the clinician what to do, it helps them make a decision with the best information possible. As Maguire puts it, it is augmented decision-making.

“Within a year we’ve brought AI_PREMie out of the lab and got it into three maternity hospitals but the next phase is to develop a standalone kit so that the biomarker testing can be carried out in the hospital itself. I’m blown away by how fast it has moved from lab to hospital, and I don’t think it could have worked without the passion and hard work by everyone involved,” says Maguire. When this is done, she says the aim is to go further and reach clinicians in developing economies. If AI_PREMie could be developed into a blood-prick test on a device that works with a smartphone app it would become more affordable and could be used in remote areas.

“We really do believe that if we can get AI_PREMie into the hands of clinicians across the world, that we will save lives. That’s why I studied science – to make a difference.” 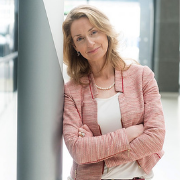