Art That Reflects the Soul of a Nation

Professor Margaret Kelleher is the first woman to sit in a prestigious chair at the UCD School of English, Drama and Film, inaugurated by the author, playwright and academic Roger McHugh in 1966. McHugh was succeeded by the scholar, writer, broadcaster, literary critic and chairman of the board of the Abbey Theatre Augustine Martin. And Martin was, in turn, followed by writer, scholar and leading cultural commentator Declan Kiberd. All four scholars are changing how we perceive Irish writers in the English language.

A small country with a massive literary impact: Irish literature has a poetry and vitality. It is socially and politically charged.

Uncovering the significance of Anglo-Irish Literature

So, why should Anglo-Irish literature be considered distinctive? “Hiberno-English gives the literature a poetry and vitality that has been seen in countless authors including Roddy Doyle and, more recently, Eimear McBride, the author of A Girl is a Half-Formed Thing,” says Kelleher.

That’s not all. “Because of our history it is socially and politically charged. Famine literature (the subject of Kelleher’s PhD) is one example, but we also see it in stories such as Anne Enright’s The Green Road. The third quality – and perhaps the most interesting – is the versatility of genre: for example, Colm Tóibín can write essays, novels, short stories and plays while Paula Meehan is a writer of poetry, drama and essays.” Also included is Room by UCD graduate Emma Donoghue, who has recently been Oscar-nominated for writing the screenplay based on the bestselling novel.

Gathering information on this literature, however, has often been a problem. Now, however, Kelleher is leading the way with the creation of a new digital resource for the study of contemporary Irish literature, the Digital Platform for Contemporary Irish Literature. “There can be difficulties in teaching contemporary Irish writing,” she explains. “This is because it takes time for critical resources, such as reviews and analyses, to become available. Our first project, 50 Irish Books, takes 50 titles in both the Irish and English languages and links them to first reviews;  author interviews from print, online, TV, audio and other sources; excerpts and other relevant material.  We are gathering information that is often scattered and bringing it together.”

This resource is the pilot project; there is much more that this digital platform can and will do, says Kelleher. She is particularly interested in the history of Irish women writers and in retrieving the work of often-neglected women writers.

"They often write on the edge of genres. They have played a distinctive role in Irish journalism and there are lots of interesting examples through from Maud Gonne to Maeve Binchy and beyond."

Kelleher is continuing to carve out an impact in her field. Throughout 2015, she played a leading role in the celebrations of the 150th anniversary of poet WB Yeats’ birth. And now, she is academic lead for a particularly ambitious project, the new €10m UCD Ulysses Centre for Literature, which will be located at the historic Newman House on St Stephen’s Green and open its doors in 2018, with the support of UCD, benevolent funding, the Fáilte Ireland Capital Programme as part of its ‘City of Words’ project and in partnership with the National Library of Ireland.

With a core exhibition celebrating 20th century writing from the Joyce period onwards, as well as rotating exhibitions exploring modern storytellers, this centre will explore the continuing success of Irish writers – and it might change how we see them.”

We're a small country with a massive literary impact. 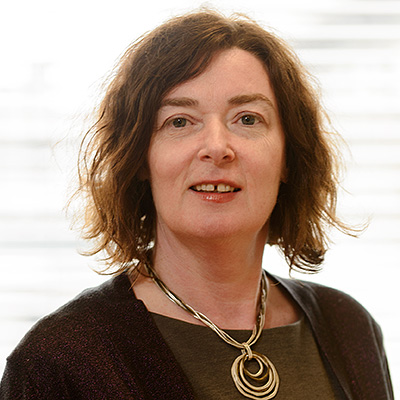 Professor Margaret Kelleher is chair of Anglo-Irish Literature at UCD and has long been intrigued by the distinctive role that writers have played in Irish history. Kelleher is the first woman to sit in a prestigious chair inaugurated by the author, playwright and academic Roger McHugh in 1966.