What single medical intervention would lead to better outcomes for mothers and babies, not only during labour but in the baby’s early weeks and months?

The answer, according to award-winning research from UCD, lies not in more drugs or surgery, but instead in the ‘Labour Hopscotch Framework’.

It’s all about supporting women in a ‘physiological’ birth where the innate abilities of the woman and baby – rather than epidurals and caesarean sections – power the process.

The framework was developed in 2015 by Sinéad Thompson, a community midwife at the National Maternity Hospital in Holles Street. Thompson worked closely with UCD’s Dr Denise O’Brien, a fellow midwife and now Associate Dean of Undergraduate Studies at the UCD School of Nursing, Midwifery and Health Systems, to formally evaluate the research.

“The Labour Hopscotch Framework is based on the practical knowledge and experience of midwives,” says Denise. “It is about helping women be physically fit and ready for labour, and it involves their birthing partners. It is focused on nutrition, exercise and physical activity and guided by midwives instead of by medicalisation. Labour is physical exercise and women need to be fit for it.

“This is based on optimal fetal positioning through the use of lunging, squatting and pelvic tilts,” says Sinéad. “These are the main positions we ask women to do during pregnancy; they widen the pelvis and, as the baby is small in early pregnancy, it is easier to encourage them into the correct position for birth.”

“Epidurals and C-sections rates were high, so we came together to design something for all women,” says Denise. “Midwives are like coaches who care for women in active labour, and we know what works”.

A hopscotch approach allows you to jump back and forth between different steps.

We explain to mothers why labour starts, why it is important to encourage the baby into the correct position to come through the pelvis. Once they are fit, healthy and recovered from hyperemesis (sickness and nausea of early pregnancy), they can be fit and ready for this approach.”

For some time, health professionals have been concerned about rising rates of epidurals (38.5%) and caesarean sections (31.2%). There are several factors at play, including the average age of mothers rising (which can be related to an increased risk of complications in pregnancy due to increased rates of obesity and diabetes), a fear of litigation and the increased medicalisation of childbirth.

But labour can be challenging and difficult, so shouldn’t women and pregnant people have as many interventions as they want? Both Denise and Sinéad stress that they want mothers to be supported to make the choices they want during pregnancy and birth, but that they deserve accurate information and facts.

“Epidurals can be life-saving and we are not saying that women should avoid them, but they are associated with more interventions during childbirth,” says Sinéad. “Women and their partners need to be fully informed about this prior to deciding and be aware, for instance, that they won’t be able to get up and have a shower after birth as they will be less mobile for several hours. Instrumental birth – involving forceps or vacuum delivery – is more associated with having an epidural than other forms of pain relief, as well as reduced bladder sensation, perineal trauma and other risks.

“The Labour Hopscotch Framework is about using gravity to quicken, enhance and shorten labour, instead of a woman feeling they are pushing up a hill”

She also points to the risks and downsides of caesarean sections. “It is major abdominal surgery and means a mother can’t drive for six weeks. A C-section increases the risk of deep-vein thrombosis, clots and embolisms – including in subsequent pregnancies – reduces milk supply and may weaken a woman’s pelvic floor.”

This collaborative research project, carried out with the Joint Research Network and funded by the National Women and Infants Health Programme (NWIP), involved 809 women and 759 partners who attended the National Maternity Hospital, as well as a focus group of eight midwives. The researchers studied the experiences that women and their partners had with the framework, what led them to use it and how it influenced epidural rates.

The results were clear: 40% of women said it influenced their birthing decisions, and epidural rates were lower among women who engaged with the framework (38.5% compared to the overall hospital rate of 57%). Nine in ten women said that the framework had helped them to feel very or somewhat confident to cope with labour.

The research has received national and international recognition. It was published in two international midwifery journals, The Practising Midwife in the UK (2020) and the European Journal of Midwives, it was a winner in the UCD Research Impact Awards 2021, and it won the 2019 Irish Healthcare Award for research paper of the year.

“The research was open to people from all backgrounds, ethnicity and choice of maternity care including private, semi-private and public patients,” says Denise. “We found that it was more likely to be used successfully for younger, first-time mothers, but less likely to be used by women attending privately. This is because private patients were less likely to have contact with midwives, whereas public patients were more likely to hear from midwives about the normal physiology of contractions and the progress of labour – and of course about labour hopscotch.”

Thompson says that their work highlighted the challenges facing older mothers: if they had already had children, they didn’t have as much time to train for labour and to concentrate on birth preparations due to busy lifestyles, and they were more likely to have an epidural.

“This highlights the importance of every woman in every pregnancy being prepared antenatally,” Sinéad says. “The framework is now being rolled out nationally. COVID-19 did slow it down, but the demand is there, and part of my role now is to get it into other hospitals, in Ireland and abroad. The evidence is clear: this improves labour and the early months of the baby’s life, for both children and their caregivers.”

Dr Denise O’Brien and Sinéad Thompson were in conversation with Peter McGuire, BA (2002), MLitt (2007), freelance journalist and regular contributor to the Irish Times. 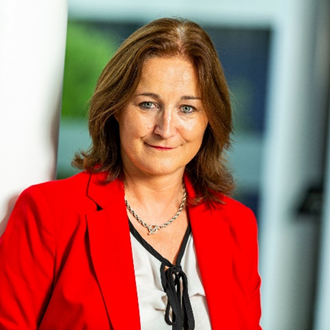 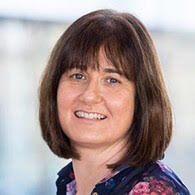