Pushing the Frontiers of our Knowledge

We’d been in lockdown for weeks. Confined to her home like the rest of us, Professor Lorraine Hanlon, an astrophysicist at the UCD School of Physics, stepped out the front door.

“The night skies had been clear for weeks,” she says. “Going into the garden and looking at the stars was one of the few things we could do.”

“When i think about space, I think about the frontiers of our knowledge of the universe: my job is to take the joy of the night sky and help us to understand it. In order to learn more, we need to develop new mission concepts and ways to discover new information.”

Hanlon was recently appointed as Director of C-Space, the first Irish centre dedicated to collaborative space research and industry. The centre, formally established in March 2020, with a virtual launch last December, brings together space researchers from science, engineering and other disciplines with companies working on space technologies. And, in one the most significant and historic developments for Irish scientists, C-Space is home to the researchers developing EIRSAT-1, Ireland’s first satellite.

EIRSAT-1 is C-Space’s flagship programme and isn’t much bigger than a shoebox, but there is – literally and metaphorically – a lot riding on it. “We’ve designed, manufactured, assembled and will operate this satellite,” says Hanlon. “It’s a first for Ireland but we don’t want it to be the last.”

Supported by ESA after being selected in a competitive process, EIRSAT-1 has been in development since 2017. The satellite carries three main “payloads” which will impact the data it returns to Earth. “First, we’ve included a compact and efficient gamma-ray burst detector – a direct outcome of our research and particularly that carried out by my colleague Associate Professor Sheila McBreen,” says Hanlon. “Second, we’ve collaborated with ENBIO on an experiment to test how their surface treatments behave in low-Earth orbit. Some of that technology was developed by ENBIO in collaboration with Professor Kenneth Stanton. The third payload, led by Assistant Professor David McKeown, is software for attitude control of spacecraft with flexible parts such as antennae and solar panels.

As of now, it’s unclear how long EIRSAT-1 will be in orbit. “Depending on various factors, it could potentially be in orbit for 20 years, which would allow it to be a brilliant educational tool for many more students, allowing them to gain live spacecraft operations experience, while using the satellite to gather science data and for wider community outreach projects,” says Hanlon.

C-Space is working with Irish companies who are feeding into the European Space Agency’s (ESA) objectives, says Hanlon. “We are testing new technologies for space which can spin into applications such as aerospace and aviation, as well as providing valuable research that could be used in hostile environments on Earth, particularly in polar, ocean or desert conditions.”

It could potentially be in orbit for 20 years, which would allow it to be a brilliant educational tool for many more students.

A 2015 evaluation for Technopolis estimated that every euro invested in space exploration would yield a return of at least an additional three euro. Meanwhile, Ireland’s investment in ESA is bringing well over 1,000 high-value technology jobs into Ireland, across a wide range of areas and industries.

The National Space Strategy for Enterprise 2019-25 highlights a range of opportunities for space research in Ireland including aviation, automotive, medical and data analytics sectors. For instance, Ireland’s strength in ICT places the country in a good position to analyse the large volumes of data generated by Earth observation which, in turn, can help create new products and services for agriculture, marine and planning which will ultimately impact what we buy in shops or online. Other jobs are being created in forest management, with another indigenous company, Treemetrics, relying on space technology for its work.

Space technology can also provide solutions for more earthly problems such as:

“I have colleagues working on gravitational waves, supernovae, exoplanets and much more,” she says. “We want to inform, guide and advise on space policy in Ireland, to move beyond an industrial focus, to include education and research in science and engineering. For instance, there is currently no space law in Ireland, and this has practical implications for the launch of EIRSAT-1 as well as the development of future Irish space missions.”

C-Space is the organic outcome of much of the work carried out by Hanlon and her colleagues. “We started thinking of it ten years ago when we realised that there were researchers across the university using space instruments and data and developing experiments and materials for space and that, rather than working independently, we could bring this activity together to harness it more effectively.”

We want to inform, guide and advise on space policy in Ireland, to move beyond an industrial focus, to include education and research in science and engineering.

In 2013, this led to the creation of UCD’s MSc in Space Science and Technology, giving students much-needed hands on experience in developing expertise for the space sector and building and testing technologies, further helping to develop Ireland’s talent pipeline. But, Hanlon cautions, there is a risk that critical research expertise may be lost if C-Space cannot further support students and continue to grow its expertise.

“Fundamental research is important in its own right and also to sow the seed corn from which applications and economic benefit will arise in the longer term,” she says. For all the social and economic impact of space exploration, however, Hanlon comes back to the majesty of the universe. “The stars were hugely significant to our early ancestors, as we can see from archaeological wonders like Newgrange. Dark skies are a valuable resource and, when the sky is relatively cloudless, we can marvel at the universe and try to grasp our place in it.”

Professor Lorraine Hanlon was in conversation with Peter McGuire, BA (2002), MLitt (2007), a freelance journalist and a regular contributor to The Irish Times. 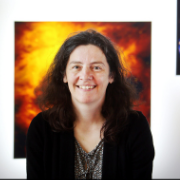