Did you have porridge for breakfast today? Maybe you had oat milk in your coffee or an oat-filled cereal bar to boost your energy levels. Thanks to their versatility and potential health benefits, oats are having something of a renaissance, and Professor Fiona Doohan is on a mission to help cereal breeders, farmers, food processors and nutritionists take a sustainable approach with them for our health and the health of the planet.

Professor Doohan, who is Professor of Plant Health at UCD School of Biology and Environmental Science, is co-leading a new, €2.7-million project called Healthy Oats, which takes a big-picture look at this staple cereal. “It’s a challenge-based project involving stakeholders in Ireland and Wales, to help small to medium enterprises to develop new products sustainably,” she explains.

From soil to human health

And why the humble oat, in particular? Oat is a historically important crop in Ireland as it can grow on relatively poor land that might not sustain staples such as wheat or barley, explains Professor Doohan, whose hometown of Gortahork in Donegal derives its name from the Irish Gort an Choirce, or ‘oat field’.

Now, the 21st century is waking up to the potential health benefits of oats, a rich source of vitamins, minerals and soluble fibre. “We are only scratching the surface of what oats could have to offer in terms of human health,” says Professor Doohan.

The Healthy Oats project, which is funded through the EU’s INTERREG programme, will test different varieties of oat in the field at UCD and in Aberystwyth, to assess their nutritional qualities and their resilience to disease, environmental change and potentially damaging ‘mycotoxins’ produced by fungi.

“We are really going from soil right through to human health in this project, in a bid to help farmers and food processors to work sustainably into the future,” says Professor Doohan.

Professor Doohan’s interest in plant health started with fungi. While studying industrial microbiology as an undergraduate in UCD, she was inspired by lectures from mycologist Hubert Fuller on how fungi interact with plants, and she went on to do a PhD at the John Innes Centre in Norwich, England, on controlling Fusarium fungi in crops. “At that stage, about 20 years ago, molecular biology was taking off and this gave us a whole new technology to explore how plants and fungi interact,” she says.

Since then, Professor Doohan’s research has focused on how to improve disease resistance in crops, most notably wheat and barley, and her scope has widened far beyond the molecular dance between plant and disease-causing attacker.

Fundamental questions bear fruit Professor Doohan’s ability to translate the knowledge from research into application earned her the NovaUCD Innovation Award 2021 last March. “It was just brilliant to receive that, I was so honoured,” she says. The award recognises her work on marker genes of disease that industry can analyse in their R&D projects, to get a faster understanding of crop disease and potentially shave years off the process of developing more resistant varieties.

“One of the biggest things I have learned over the last two decades of research in this area is that you need to look beyond the binary questions – what pest affects which crop – and take the larger picture into account. You really have to look at the entire system and come up with realistic ways to intervene.”

Fundamental questions bear fruit Professor Doohan’s ability to translate the knowledge from research into application earned her the NovaUCD Innovation Award 2021 last March. “It was just brilliant to receive that, I was so honoured,” she says. The award recognises her work on marker genes of disease that industry can analyse in their R&D projects, to get a faster understanding of crop disease and potentially shave years off the process of developing more resistant varieties.

She is also innovating to control the microbes that live on and around the crop plant, encouraging beneficial fungi to improve the resistance of the crop against disease. She is a co-founder of e-Seed Crop Technology Solutions, a joint UCD/Trinity College Dublin spin-out company that is developing microbe mixes to add to soil to increase crop yields.

“This really emerged from fundamental research in our lab, blue-sky research that was funded by Science Foundation Ireland, and now we are seeing the fruits of it,” she explains. “Now we are able to work with companies and develop usable, realistic solutions to improving the health of the soil and micro-environment around the crop.”

Stick to your core and collaborate

Throughout much of her time at UCD, Professor Doohan has had a longer commute to work than most – from Donegal to Belfield. “I live 20 minutes from the airport in Donegal, so up until COVID-19 hit I was working three days a week in UCD and two from home, it is a good balance with kids and family,” she says. “Also I love the contrast of being in Dublin and walking around the city, then getting the plane home and it is like being on the other side of the world.”

Similarly, she has held firm to her core in research, using technology as a tool to answer questions rather than becoming distracted by it. “My advice to all scientific researchers is not to get waylaid by the technology,” she says. “Always have a scientific or biological question that you want to answer, use the technology that can help you and work with experts. That really is the key I think to cracking the nut of innovation and delivering for industry, you have to love what you do and keep that scientific curiosity at your core.”

Professor Fiona Doohan was in conversation with Dr Claire O’Connell (BSc, (Hons) 1992, PhD 1998), journalist with The Irish Times and Silicon Republic and Irish Science Writer of the Year 2016. 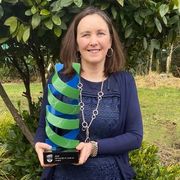